Hydro-Inertia training is an awesome way to create core stability and enhance the ability to resist motion in specific planes of movement. It’s also a great way to train explosive hip flexion to hip extension movements. 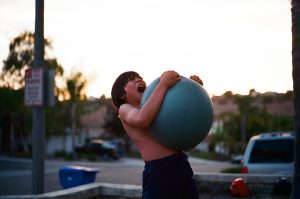 Hydro-Inertia is the use of water to create instability or an unstable resistance during an exercise. This creates for a more functional exercise because the body must resist motion in multiple planes of movement due to the unstable external object!

Youth athletes or any athlete under 5′ should use the 45cm ball. Athletes that are older and/or above 5’5 should use the 65cm and/or 75cm ball. Fill the ball about 1/4 with water. You want this to be difficult, but not too heavy that the athlete cannot move the ball in a fast motion.

Athletes have a difficult time understanding what full hip extension is or are unaware of how to activate the glute musculature so the hips extend. Remember, the glute muscles, when activated, extend the hips!
In this video notice I am activating my glute musculature at the top portion of the movement. This is important for athletes to feel their butt muscles working and allowing that musculature to FULLY extend their hips.
Inexperienced athletes OR youth athletes will sometimes stop before they actually let their hips fully extend….and perform a knee extension movement instead.

In Throwing, the hips will go from some degree of hip flexion to hip extension with an element of trunk rotation through ball release. These two movements are almost identical in sequence and pattern.

The ability to generate force fast is important. Rate of Force Production OR Force x Velocity will determine power output. For young athletes, understanding hip flexion to hip extension is critical. Only a handful of athletes are mentally prepared and focused to work on Olympic Lifts, so the Water Ball comes into play and becomes another super valuable tool for youth strength, power and coordination. .

The Water Ball Lunge is a great exercise for core stability, single leg stabilization as well as bilateral shoulder stabilization. The water inside of the Stability Ball creates a hydro-inertia effect which creates instability or an unstable resistance when performing the movement. The body has to resist motion in multiple directions in order to control the object, resulting in a more functional exercise!
To increases the difficulty of this exercise, add a rotational element or an overhead pressing movement. This will create more instability, challenging the core, legs and shoulders! We usually perform 3-4 sets of 4-6 repetitions.

Water Ball Squat to Press
Using the hydro-inertia effect when performing the squat to press movement, the body must resist motion in multiple directions in order to stabilize the object during the entire squat to press movement. Make sure you extend the hips at the top portion of the movement by activating the glute musculature but be careful of hyper-extending the lumbar spine. There’s a big difference between the two movements! We usually perform 3-4 sets of 6-8 reps.

If you liked the article and want to learn more about youth strength training and see all of our online training videos + programming, check out the Youngblood Training Manual for $39! 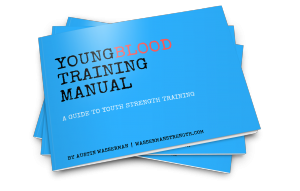