You are here: Home / Articles / Strength Training With Pectus Excavatum

What is Pectus Excavatum?

Pectus Excavatum, also called funnel chest, is a congenital disorder that occurs when the breastbone sinks into the chest that occurs in approximately 1 out of 700 children.  This often leaves a large indentation in the center of the chest and can compress both the lungs and heart.

This compression on the heart and lungs can impair exercise capacity and cause shortness of breath in athletes due to decreased efficiency to pump blood throughout the body and exchange O2and CO2in the lungs. 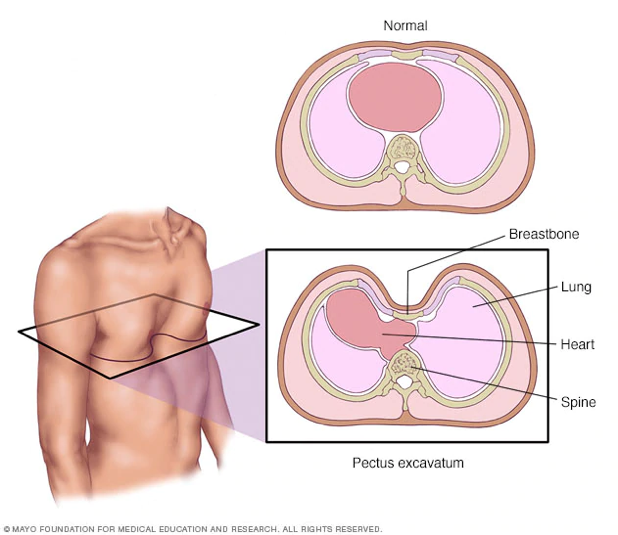 It is not quite known what causes pectus excavatum, but it can sometimes run in families.  There are also multiple disorders that co-occur with pectus excavatum and may be related to its cause including Marfan syndrome, Poland syndrome, rickets, and scoliosis.

While mild cases may be barely noticeable, more severe cases of pectus excavatum will show a noticeable hollowing in the chest. This can cause negative symptoms such as decreased exercise tolerance, tiredness, chest pain, rapid heartbeat (tachycardia) or heart palpitations, frequent respiratory infections, coughing/wheezing, and more.  This condition typically gets worse as children grows and affects boys more often than girls.

While pectus excavatum can typically be diagnosed with a regular physical exam due to the noticeable hollowing of the chest cavity, other tests may be utilized to examine the severity.  There are four primary tests that may be administered by doctors to identify anatomical and physiological abnormalities that are caused by the pectus excavatum.  Depending on the outcomes of these tests, a plan of treatment and any possible contraindications to exercise.

It should be known that pectus excavatum does not actually require treatment because it is not life threatening.  However, many will choose to correct the deformity due to the heart and lung symptoms associated with a sunken chest as well as the psychological/emotional distress caused to their self-image.

It is also recommended to wait until the teenage years if it is decided the child will have surgery to ensure puberty has already started or finished.  In the case of mild pectus excavatum in children, a vacuum bell device may be utilized as a non-surgical approach.  It may also be utilized in addition to surgical repair.

If surgery is done during childhood (before puberty) there is risk of reappearance again in adolescence once they undergo their growth spurt during puberty. The two surgical approaches include the Ravitch Procedure and the Nuss Procedure.

The Ravitch Procedure includes the removal of abnormal cartilage and ribs, surgical fracture of the sternum to place it in it’s optimal position, and a metal support system to hold the chest in proper position.

The Nuss Procedure is a more recent, less invasive surgery that requires the insertion of a curved metal bar to push out the sternum and ribs.  The chest is permanently reshaped in 3 years and then both bars are surgically removed. Surgical intervention has been shown to significantly improve self-esteem, lung function, heart function, and exercise tolerance.

Prior to surgical intervention, it is important to consistently monitor the athlete and allow for adequate rest intervals due to increased shortness of breath and decreased exercise tolerance.  In severe cases it would be better to implement standing and sitting exercises versus supine exercise.

Due to the compression on the heart and lungs that may cause decreased stroke volume and respiratory mechanics, a supine position would create a greater reduction in work capacity.  An upright posture has been shown to be less demanding on heart function and also allows for gravity to assist with the downward motion of the diaphragm during inhalation to improve respiratory mechanics.